The stars from the USA convince at the Swimmeeting Südtirol. Double victories for Kathleen Baker and Kelsi Dahlia - Three meeting records on the first day in Bolzano- 16th win for Fabio Szozzoli - Marius Kusch wins twice 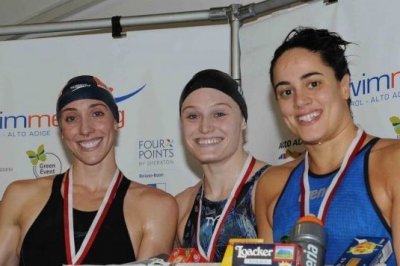 The swimming stars from the USA kept their word and fully convinced on the first day of the 22nd edition Swimmeeting South Tyrol, which this year is a green event again. Two stars, two wins and two meeting records. The outstanding athlete on the first day was Kelsi Dahlia. The relay Olympic champion from Rio opened the event on Saturday afternoon with an event record over 100 m butterfly. She broke in 52.61 the previous record of Arianna Vanderpool Wallace from 2015 by eight hundredths of a second. Dahlia won comfortably ahead of Madison Kennedy (54.22) and Erika Ferraioli (54.32). Shortly thereafter, Dahlia set a new meeting record over 50 m butterfly. In 25.67, she was 0.03 seconds faster than Inge Dekker in 2009. For Dahlia, there was the 1000 euro prize money and a lot applause from the spectators. Kendyl Stewart (25.86) and Elena Di Liddo (26.36) were left behind. Kathleen Baker, the fastest backstroke swimmer in the world, she set a new world record over 100m backstroke on longcourse in 58.00 seconds at the end of July, was also a class of his own in this race in Bolzano. In 56.85 she swam a sensational meeting record and was 1.31 seconds faster than Kira Touissant the previous year (58.16). Baker, being in Bolzano for the first time, showed a fabulous performance over 100m IM and was without competition in 59.35. Laura Letrari missed the podium in fourth place in 1.01.97 and also had to give Dahlia (1.01.50) and Stewart (1.01.75) the lead. Fabio Scozzoli has been a regular guest in Bolzano for many years. Also this year he fulfilled the expectations. He won the highly anticipated duel with Nicolò Martinenghi over 50m in 26.40 seconds (Martinenghi 26.84) and celebrated his 16th win in Bolzano. In the Eternal Bestlist he caught up with Janine Pietsch in second place. At the top is Thomas Rupprath with 18 successes. Scozzoli's girlfriend Martina Carraro won the Women's 50m breaststroke in 30.99 in front of Maria Romanjuk from Estonia (31.26) and Baker (31.38). It was also an Italian win by upcoming talent Thomas Ceccon, who was the fastest over 100 meters backstroke in 52.00 seconds. He won ahead of Lorenzo Mora (52.37) and David Gamburg of Israel (52.47). Ceccon was a little bit unlucky too. Twice he was beaten by Marius Kusch. The German missed the meeting record in the sprint over 50m dolphin in 23.20 seconds only by eight hundredths (Ceccon finished second in 23.36). Even closer was the final over 100m IM. One hundredths was in favor of Kusch, who won in 53.54 ahead of Ceccon (53.55). Brazil's Matheus Santana touched the wall over 100m freestyle in 48.33 seconds just in front of Kush (48.39) and the American Michael Chadwick (48.46). Only fourth place was left for audience favorite Marco Orsi in 48.55, who also missed the podium over 100m IM. On Sunday, the stars are in the water at the Swimmeting South Tyrol from 13.50 clock on wards. As part of the Green Event, the participants will be sensitized to the topics of waste, waste separation and sustainability, and the organizers will implement appropriate measures. The invited participants were given mobilcards during the event and transfered by public transport.
Thursday, 25. October 2018