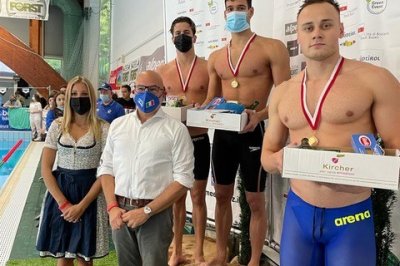 Simone Stefanì the revelation of Swimmeeting South Tyrol: His is the meeting record in the 100 butterfly in 50.56 - Beaten Ponti and Zaitsev - Lobanovskij triumphs over the 50 freestyle in 21.23 Great swimming again on the second and final day of the 25th edition of the Swimmeeting South Tyrol, also Green Event for many years. The most heartfelt race was the one over 100 butterfly where the second record of the event was broken after the 50 butterfly on Saturday. The big favourites at the eve were Noè Ponti, third at the Tokyo games over this distance, and Daniel Zaitsev, finalist at the Short Course Europeans a week ago in Kazan. But to establish the record is the lesser favourite, Simone Stefanì, the surprise of the weekend. In 50.56 (fourth fastest time of the season in Italy) he puts everyone in line, breaks down the old Bolzano record of Mario Todorovic from 2009 (50.80) collects the 1000 euros prizemoney and is obviously satisfied: "Considering that I swam the last 100m Butterfly two years ago this is a good time. My personal was 52.0. We started the season well”, said the 21-year-old, who trains in Caserta and wants to lower this time at the Italian Open Championship end of the month. Ponti in 50.81 consoled himself with the new Swiss national record. On Saturday he had already established a Swiss record on the 50 butterfly in 22.91. The Ticino-born has started in Bolzano his short course season and was at the first races after Tokyo. Third Zaitsev in 51.50. Stefanì was not satisfied with the victory over the 100 butterfly, he also won 50 breaststroke race in 23.95, a respectful third victory in this weekend after the first place over the 100 backstroke on Saturday. The two days in Bolzano ended with a bang. The Hungarian Maxim Lobanovszkij, still competing in the play-offs of the International Swimming League in Eindhoven on Friday, tried to snatch the event record from Marco Orsi (21.23) and got close, but not close enough, showing a beautiful race and winning in 21.37 ahead of Zaitsev (22.04) and Luca Todesco (22.42). Second victory in Bolzano for Sasha Touretski, the Swiss, who competed in Rio at the Olympic Games in 2016, she won the 100 butterfly in the women's field in 59.53 ahead of Elena Capretta (1.00.21). In the 50 freestyle race Touretski had to settle for second place in 25.34 behind Aglaia Pezzato who touched first in 25.13. Laura Letrari at her last home meeting finished with a flourish second place over 50 backstroke in 27.87, beaten only by Sonia Laquintana (27.57). "I hadn't swam for a while the 50 backstroke, I'm really happy," said the South Tyrolean, who will bid farewell to swimming at the end of the season. In the 100 breaststroke race both Maria Romanjuk and Lachezar Shumkov got the double win after the races won on Saturday over 50 breaststroke. Romanjuk won in 1.08.58 in front of Vanessa Cavagnoli (1.09.71), Shumkov in 1.01.08 got the better of Andrea Savoca by one tenth (1.01.18
Saturday, 13. November 2021