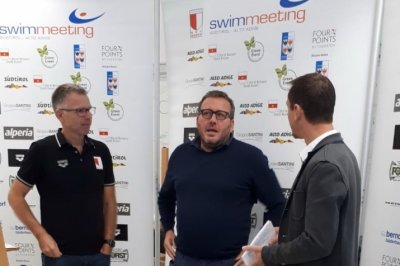 Exactly on the day, one month before the 22nd edition of the Swimmeeting Südtirol, which will be held in Bolzano on the 3rd and 4th of November, the event around the City of Bolzano Cup was presented to the public by OC-chief Christian Mattivi from the SSV Bolzano. Since 1997, he and his organization team have been bringing the world class to the South Tyrolean capital.
Bolzano has made a name for itself in all these years, not only at national level, but also worldwide. For many Azzurri, the first meeting is in Bolzano on the first weekend in November and at the same time the first opportunity to start the new season. After all a season peppered with numerous highlights: two world championships. The Short Course World Championships in Hangzhou, China from December 11th to 16th and the Long Course World Championships seven months later in July 2019 in Gwangju, South Korea.
The Swimmeeting Südtirol is a first test for everyone. Fabio Scozzoli has a very special relationship with Bolzano. He definitely feels at home has already registered himself 15 times in the list of winners in his career. Last year he won over 100m IM for the first time. Over 50 and 100 meters breaststroke, he got seven victories each. Should Scozzoli make the hat trick again this year, he would catch up with record winner Thomas Rupprath from Germany, who won 18 times in the pool between these mountains. At least Janine Pietschs record (also Germany), who is second in the Eternal list with 16 victories, is Scozzolis target.
Scozzoli is already 30 years old, but he was faster than ever during the last season. At the European
Championships in Glasgow in August, he had been beaten over 50-meter breaststroke in 26.79 seconds only by His Majesty Adam Peaty and missed his Italian record from April (26.73). Scozzoli set his short-course Italian records last December at the European Championships in Copenhagen. The 25.62 brought him not only gold, but also the European record. In Denmark, he also conquered a silver medal over 100 m breaststroke in 56.15. "It is a real pleasure for us to have every year Fabio Scozzoli with us. He is one of the audience favorites and has never disappointed, "says OC-chief Mattivi.
Great tension prevails before the comeback of Nicolò Martinenghi. Italy's record holder over 100 m breaststroke on the long course (59.01) returns to Bolzano to race after a long time. The 19-year-old had baffled the swimming world in 2017 and won the gold double over 50 and 100 breaststroke at both, the Junior World Championships in Indianapolis and at the Junior European Championships in Nethanya in Israel, but the last season Martinenghi had to fight again and again against physical complaints. "Since March, he has forfeit competitions and missed the European Championships in Glasgow. For a few weeks he has returned to train more motivated than ever, "says Mattivi. Even the women competitions will present a strong breaststroke swimmer. Martina Carraro has set
Italy's 100m breaststroke record on long course in 2016 (1.06.41) and finished sixth and seventh, respectively in 31.11 and 1.07.59, at the Glasgow European Championships over the 50m and 100m races.
Not just Italy at the vicarage: Stewart, Neal and Santana
Traditionally, not only Italy's top swimmers are strongly represented at the Swimmeeting South Tyrol by wellknown athletes from abroad, especially from the USA. Olympic champions Aaron Peirsol, Natalie Coughlin and Ryan Lochte are just the tip of the iceberg of athletes racing in Bolzano. Once again, strong athletes from overseas will return to South Tyrol's capital this year. The strong butterfly swimmer Kendyl Stewart has won silver with the US team relay at the 2015 World Cup in Kazan. For the first time, Lia Neal will also be in Bolzano, she won medals with the US Freestyle relay over 4 x 100 m freestyle at the last two Olympic Games. (Bronze in London 2012, Silver four years later in Rio). Neal also won gold twice at the 2017 Long Course World Championships in Budapest. With the female freestyle relay over 100 m and with the US mixed relay over 4 x 100 m freestyle. From Brazil at the start in Bolzano Mateus Santana, who swam with the Brazilian team at the 2016 Olympic Games the finals over 4 x 100 m freestyle. Stefano Razeto the German vice-champion over 50 m freestyle has agreed to come too.
Super jackpot of 1000 euros in eight races
In eight of the 18 individual races, the winners have the chance to win a prize money of € 1000 and win therefore the super jackpot of meeting records older than three years. Four event records are still from the year 2009, when to swim with the high-tech suits were allowed for the last time. The 50 m women's butterfly (Inge Dekker in 25.70) and three men races: 100 butterfly (Mario Todorovic 50.80), 50 and 100 backstroke (Nick Thoman in 23.69 e 50.32).
Program unchanged: "The best series" on Saturday from 4.00pm and on Sunday from 1.30pm on
There are no changes in the proven program of the past decade. As always, the numerous audiences will see the stars in action on Saturday from 4pm and on Sunday from 1:30 pm. The three best series of each competition of the day within 90 minutes. Mattivi stands for the format: "Why should we change something? The spectators like it because they are the most important races in no time at all, and even the athletes have nothing to complain about, because they do not have to be in the pool facility from the morning to the night, even many of them come because the atmosphere is special and unique."
All races live on the internet
As always since 2012, there is also a live streaming of the entire meeting on the Internet. Swimmers all over the world can follow the competitions (including Super Series) on www.meetingbz.it or www.liveye.it in real time. Another reason why the Swimmeeting South Tyrol is known around the world and well-spoken of.
Swimmeeting Bolzano › Team › news
The European Directive 2009/136/EC (E-Privacy) regulates the use of cookies, witch are used also on this site! By using our website or by clicking "OK" you agree. Further information
OK