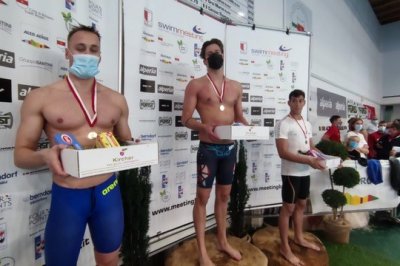 Noè Ponti shines at the Swimmeeting _South Tyrol: His is the only record of the first day on the 50 butterfly in 22.91 - Laura Letrari wins once again the 100 medley - Super-Stefanì on the 100 backstroke Exciting races to the last hundredth of second characterized the first day of the 25th edition of Swimmeeting South Tyrol, also one of the first Green Events in Alto Adige for many years now. On the shields the Swiss Noe Ponti, bronze medal in Tokyo over 100 butterfly, who sets a new record in the 50 butterfly event (22.91). The Italian Simone Stefanì and Laura Letrari, the home idol, at their last participation at this meeting. Outstanding performance for the Swiss Noè Ponti in the 50 butterfly race in 22.91, touching first with a hundredth advantage over Estonian Daniel Zaitsev (22.92). Both remain below the old record of Thomas Ceccon (23.05 in 2019), but the prize money (500 euros) goes to Ponti, who at the end of Saturdays session also triumphed over the 100 medley in 53.74 ahead of Simone Stefanì (54.45) and Zaitsev (54.46). “It's nice to start the season with two wins,” Ponti said after his first two races this season. Stefani had already shown his great form with the 100 backstroke victory, where he improved his personal best from last week by eight tenths, and dominated the race in 51.23 , getting in the within a second range of Nick Thoman's meeting record. (50.32 in 2009). “At the Italian Championship in two weeks I want to swim a 50.”, said Stefanì. Show of strength at the farewell meeting in Bolzano by Laura Letrari. The 32-year-old from Bressanone wins the 100 medley for the sixth time (eighth in total at the Swimmeeting South Tyrol) in 1.01.60 for one hundredth over Maria Romanjuk (1.00.61), the Olympian for Estonia in Tokyo. “I wanted to win this race for me, for my family, for all the hardships, even if the final time isn't great. The meeting was inaugurated with two Italian victories over the 100 freestyle. In the women's field Aglaia Pezzato wins in 54.56 in front of Alessandra Miari Fulcis (55.24), in the men's field the victory goes to Mattia Scarpa (49.09). Place of honor for Giovanni Carraro (49.63). Maria Romanjuk (Estonia / 31.47) and the Bulgarian Lachezar Shumkov (27.94) triumph over the 50 breaststroke. The women's 100 backstroke victory goes surprisingly to Sonia Laquintana, who in 1.00.11 does not leave a chance to the favorite Carlotta Zofkova (1.01.09). Third Swiss victory of the day finally for Sasha Touretski on the female 50 butterfly race in 26.66. Also satisfied Christian Mattivi, the head organizer of the SSV Bozen Swimming Club, which since 1997 has brought great swimmers to South Tyrol: “We have seen very hardfought competitions. We hope that tomorrow will be carrying on like this. " The big names will take to the water starting from 2.10 pm
Thursday, 11. November 2021