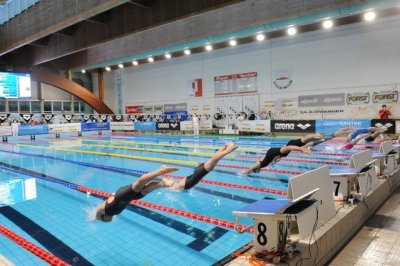 It won't be a record event, but this coming weekend the Swimmeeting Südtirol is celebrating its 25th anniversary with a still impressive start list. On Saturday (start of the fastest heats at 3:35 p.m.) and Sunday (top runs start at 2:10 p.m.)
numerous champions will take their mark in the 25-meter pool in Bolzano. Including four athletes who took part at the Olympic Games in Tokyo last summer. Some well-known swimmers from Italy are also registered and for the last time Laura Letrari will take part in her home meeting before ending her career after this season.
Covid-19 is as omnipresent in Italy as everywhere else and at the beginning of the short course season the pool facility will not be as full as we were used to until
2019. “We will follow all protocols. There is only access with a Green Pass, we have a limit of participants and no outside spectators in the stands, but we insist to give a sign of a restart, ”says Christian Mattivi, the OC-head of the SSV Bozen, who organizes this Meeting since 1997.
“It’s not out of the question that we will see meeting records,” says Mattivi. The men's 50 and 100 m butterfly in particular promise to be hotly contested.
Because in addition to the Swiss Noè Ponti, surprising bronze medalist in Tokyo over 100 m butterfly, the Estonian Daniel Zaitsev will also take part. Last week he finished sixth in Kazan over 50 m fly in 22.51 seconds. Both want to break the oldest meeting record. Mario Todorovic's 50.80 over 100 m butterfly resists since 2009. Mattivi also doesn’t rule out a meeting record over 50 m freestyle by Maxim Lobanovszkij from Hungary, who won bronze at the 2019 European Championships in Glasgow.
In addition to Ponti and Lonaovszkij, Ieva Maluka for Latvia and Maria Romanjuk for Estonia took part in the Olympic Games in Tokyo too. Then there is the Swiss Sasha Touretski, Olympic starter 2016 in Rio for Switzerland, and Letrari, who swam the freestyle relay with Italy in 2012 in London.
There are entries from some strong Italian swimmers. Starting with Carlotta Zofkova, who won bronze at the European Long Distance Championship 2018 in Glasgow over 100 m backstroke setting the Italian record in 59.61 seconds, followed by Aglaia Pezzato and Giorgia Biondani. Letrari races three times (100 m medley, 50 m backstroke and 50 m freestyle) and aims for her eighth win in Bolzano since 2009.
The Swimmeeting South Tyrol is broadcasted directly via live stream. "As in previous years, the meeting can be seen both on our homepage at www.meetingbz.it and on www.liveye.it," says Mattivi.
Wednesday, 10. November 2021