Star of the 26th edition in Bolzano 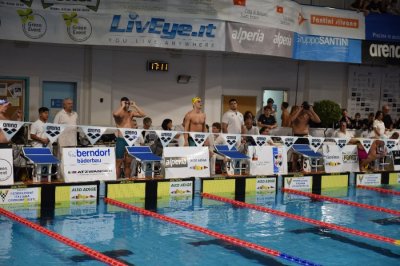 Noè Ponti, the Olympic bronze medalist and European Championship silver medalist in the 100 m butterfly, left his mark on the 26th International Swimmeeting South Tyrol. This weekend, in five starts, the 21-year-old Swiss celebrated five victories in Bolzano and set the only two event records in 2022. In doing so, he equalled the record of Thomas Rupprath, who had also won five times in Bolzano in 2001 and 2002. After his meeting best time on Saturday in the 50m butterfly (22.77), on Sunday he easily beat Simone Stefanì's record in the double distance from last year (50.56), breaking the 50-second mark in 49.88 seconds. In addition, Ponti also won the 50 m freestyle today. In a thrilling race, he finished in 22.38 seconds, a razor-thin margin ahead of Portugal's Miguel Marques (22.41) and Fernando Souza da Silva (22.47). "I am satisfied with my time in the 100 m butterfly, in the 50 m freestyle I risked losing," said Ponti, who wants to win medals at the World Short Course Championships in Melbourne, Australia, in a month. On Saturday he had won in the 50 m butterfly, 100 m freestyle and 100 m individual medley. Also celebrating two victories on the final day was Georgios Spanoudakis from Greece. He won the 50 m backstroke in 24.92 seconds and shortly afterwards he also prevailed in the 100 m breaststroke race in 1.01,00 minutes ahead of the Bulgarian Lachezar Shumkov (1.01,50). In the women's 100m breaststroke, Nika Godun missed the seven-year-old event record of Katie Meili (1.04,40) in 1.05,15 minutes, but was unchallenged in her second victory after the 50m breaststroke on Saturday. The "double" was gained today by Bolzano's regular guest Madison Kennedy from the USA too. After the 100 m freestyle on Saturday the 34 year old American was also unbeatable in the 50 m sprint and celebrated in 25.28 her 8th victory at the Swimmeeting South Tyrol. Another "double victory" were also achieved by her teammates Kendyl Stewart and Ali DeLoof. Stewart defeated the adversaries after the 50 m dolphin the day before also over the double butterfly distance in 1.01,06 minutes. DeLoof has been the number one in the 100m backstroke on Saturday. Today she also prevailed in the 50 m backstroke in 28.07 seconds. South Tyrol's athletes also did well again today. Sabrina Weger from SSV Bolzano finished second in the 50 m freestyle in 25.76 seconds, as she did on Saturday in the 100 m freestyle, and once again just missing her best time. Luca Scampicchio (also SSV Bolzano) set once again two provincial records over 100 m butterfly in 55.71 seconds and over 50 m backstroke in 27.14 seconds, after he had already swum a regional record over 100 m freestyle and a provincial record over 50 m butterfly on Saturday
Saturday, 05. November 2022