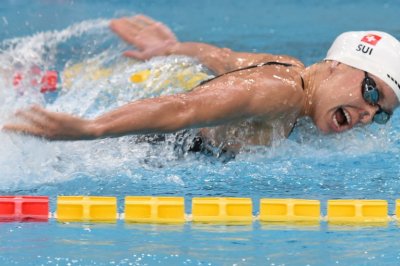 The Swimmeeting South Tyrol is 25 years old. In November 1997, the most important swimming short course event in the Alps was born. The first edition took place a quarter of a
century ago in the Albert Pircher Pool in Bolzano. The meeting, which has been held according to the criteria of a green event for 10 years now, has never been cancelled and was held at a
later date and without spectators even in the Corona pandemic year 2020. In exactly one month, on the usual date, world class will show down again on November 5th and 6th. For the
26th time overall.


In the last 25 years, many big names of the international swimming family have entered Bolzano’s list of winners. The meeting in the provincial capital of South Tyrol has always been
the starting signal for the short course season in Italy. This will not be the case this year. "Unfortunately, this time the Italian top athletes will be absent from our meeting," says
Christian Mattivi from SSV Bozen, who has also been the OC chief of the event since its premiere in 1997. The problem is not that the Bolzano meeting coincides with that in Genoa
scheduled for November 4th to 6th, but the Nico Sapio meeting in Liguria is the Azzurri's first opportunity to qualify for the short course World Championship in Melbourne – Australia -
from December 13th to 18th. "The Italians have therefore the second and last chance a week later on November 11th and 12th at the Italian Short Course Championships in Riccione," says
Mattivi. “Understandably, all swimmers from Italy who have a chance at the World Championships will start in Genoa. "This year it’like this, but we'll keep going."


A month before the two-day event, the organizers can already announce the first important starters from abroad. The Swiss Noè Ponti is one of them. The 21-year-old from Locarno in
Ticino has always brought home a medal at the last major events. After the sensational bronze medal at the Olympic Games in Tokyo 2021 over 100m dolphin, Ponti conquered silver over
200m dolphin at the short course world championships in Abu Dhabi last December. On August 14th at the European Championships in Rome, he won again silver in the 100 m dolphin
race in 50.87 seconds and was only beaten by the exceptional Hungarian Kristian Milak (50.33).


"This year again, Ponti could be capable to swim a meeting record over 50 or 100 m dolphin," assures Mattivi. Last year, the only two event records on these two distances were set by Ponti
over 50 m (22.91) and by the Italian Simone Stefanì over the double distance (50.56).


However, Ponti will not be the only international star swimming in Bolzano. Ali DeLoof comes to Bolzano from overseas. The 28-year-old American is a backstroke specialist. She won three
gold medals with the US relay at the 2016 Short Course World Championships in Windsor, Canada. She also won bronze in the 50m backstroke at the same event. Her achievements also
include a gold medal with the USA at the 2019 Pan American Games in Lima and gold in the relay at the 2017 Universiade in Taiwan. Fernando Souza da Silva, who was born in Brazil and
now starts for Portugal, and breaststroke specialist Agne Seleikaite from Lithuania have already confirmed their start in Bolzani in four weeks’ time. Souza da Silva swam the 50m
dolphin in 23.16 seconds at last year's World Cup in Qatar and at the national championships in April the 100m dolphin in 53.64. Seleikaite won the 50m breaststroke title at the 2018 Youth
Olympic Games in Buenos Aires


The competition program remains unchanged. The fastest 3 series (Top 24) will each take place separately in concentrated form. On Saturday between 4.30 p.m. and 6.30 p.m. and on
Sunday between 1 p.m. and 3 p.m.


25 years Swimmeeting South Tyrol. It's worth taking a quick look back. It all started in November 1997 when Italy's breaststroke queen, Manuela Dalla Valle, was the first to arrive
at the meeting. So many great champions have visited Bolzano in the years ever since. Ryan Lochte, Aaron Peirsol to name just two Olympic champions from the USA. The most successful
competitor in this quarter of a century was Thomas Rupprath from Germany, who competed in Bolzano six times and won 18 times between 2001 and 2008. Immediately behind is Fabio
Scozzoli, Italy's breaststroke champion of the past decade. Scozzoli can look back on 17 victories. He won the 100m breaststroke eight times between 2009 and 2018. Third in this
ranking is another swimmer from Germany: Janine Pietsch celebrated 16 victories in Bolzano. Behind them are the “Bomber” Marco Orsi with 13 first places, US Champion Natalie Coughlin
(11) and Steffen Deibler from Germany (9). One of the three athletes with 8 victories is a South Tyrolean Laura Letrari, the 33-year-old Brixner from Bolzano Nuoto, who ended her career
last summer. she won the 100 m individual medley six times between 2009 and 2021.
Swimmeeting Bolzano › Team › news
The European Directive 2009/136/EC (E-Privacy) regulates the use of cookies, witch are used also on this site! By using our website or by clicking "OK" you agree. Further information
OK