Three victories and meeting record in the 50 m butterfly in 22.77 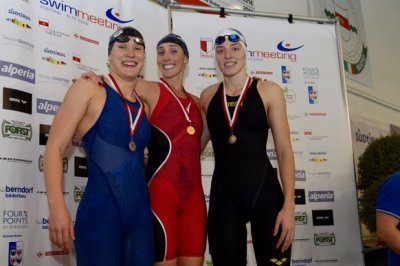 Even without Italy's top swimmers, there was great sport and top times at the 26th Swimmeeting Südtirol on Saturday afternoon in Bolzano. The event, which has also been a Green Event since 2010, has been around for a quarter of a century and is annually one of the first important short-course meets in Italy. The outstanding athlete on the first day was Swiss Olympic bronze medalist and European silver medalist Noè Ponti. The 21-year-old from Ticino won three races and also set the only meeting record of the day in the 50 m butterfly. In 22.77 seconds he improved his event best from last year (22.91) by 0.14 seconds. Ponti also won the 100m freestyle in 48.24 seconds as opening of the meeting and the 100m individual medley in 53.23 seconds to close the day. Both are personal bests for Ponti, who will compete in the 100 m butterfly and 50 m freestyle on Sunday. Nika Godun celebrated two victories on the first day. The 25-year-old Russian, who competes for BVSC Budapest and travelled from Hungary, just missed two event records. She won the 50m breaststroke in 30.06 seconds, two tenths of a second slower than Katie Meili's best from 2015, and the third-placed swimmer at the last European Short Course Championships was also clearly the fastest in the 100m individual medley in 1:00.49. The swimmers from the USA fulfilled expectations. Madison Kennedy, who competed in Bolzano for the first time in 2009, lived up to her role as favourite in the 100 m freestyle in 56.05 seconds and celebrated her 7th victory overall in the valley city. Ali DeLoof won the 100 m backstroke in 1.00,74 and Kendyl Stewart was unbeatable in the 50 m butterfly in 27,19. In the men's 50m breaststroke, Lachezar Shumkov from Bulgaria repeated his victory from the previous year, Today in 28.47 seconds. In the 100 m backstroke race, Thierry Bollin won the fourth Swiss medal of the day in 52.17 seconds. The South Tyrolean athletes were also able to put themselves in the spotlight. Sabrina Weger from SSV Bozen made it to the podium twice (second 100 m freestyle, third 50 m butterfly), Laura Dema from SSV Bruneck got second in the 100 m backstroke. Luca Scampicchio from SSV Bozen swam a youth regional record in the 100 m freestyle (50.71) and a youth provincia record in the 50 m butterfly (25.04). The SSV Bozen boys' relay team (Patrick Bevilaqua, Lorenzo Benedetti, Luca Scampicchio, Jacopo Pitone) set a youth regional record in the 4 x 50 m medley relay in 1.48,53. Part two of the 26th edition of the International Swimmeeting South Tyrol follows on Sunday, with 37 clubs from twelve countries taking part this year. The stars can be admired in the fastest three series (top 24) from 1.20 pm.
Friday, 04. November 2022