Godun, European Championship bronze, will also be in Bolzano at the weekend 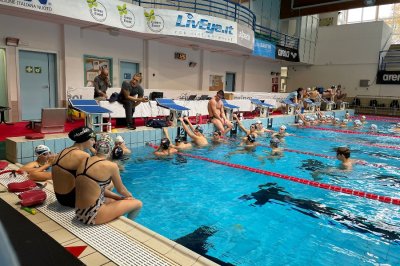 The Swimmeeting Südtirol was launched 25 years ago. This weekend (5th and 6th November) it will take place in Bolzano for the 26th time. Although the big names of Italian Swimming are absent this year, due to the fact that they will compete at the concurrent meeting in Genoa, the event still promises high quality competition. Exactly 507 athletes from twelve countries and 37 clubs (with 2178 starts) have registered this year. As always, the top stars will start in the afternoon in the three fastest series (Top 24). Meeting records will be hunted on Saturday between 3.50 p.m. and 5.30 p.m. and Sunday between 1.20 p.m., where spectators can watch swimming stars in a short time "With the exception of the 2020 Corona edition, we have always had at least one new event record, and I am confident that there will be new best times this year," says OC chief Christian Mattivi from SSV Bozen. The Swiss European Championship runner-up Noè Ponti can undercut his own meeting record from the previous year over 50 m dolphin (22.91) and also break the mark set by Simone Stefanì over 100 m dolphin (50.56) the previous year. There could also be new records in the 50m and 100m breaststroke, where the Hungarian Nika Godun starts: third in the short course European Championship last year in Kazan over the 50m breaststroke (29.80). "Godun starts for the club BVSC from Budapest and travels from Hungary at short notice," says Mattivi. Of course, swimmers from the USA shall not be missing in Bolzano. Madison Kennedy, Ali DeLoof and Kendyl Stewart are coming this year. South Tyrol's clubs are also fully represented at the first highlight of the new season.
Friday, 28. October 2022