25th Swimmeeting South Tyrol on the 13th and 14th November 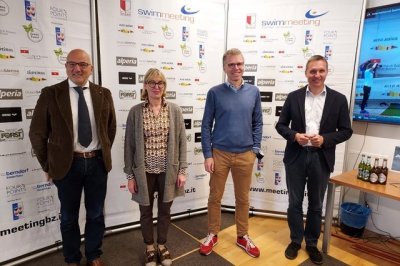 Since 1997 the indoor swimming season in Italy starts in Bolzano. In 2020 - the year of
the pandemic - Swimmeeting South Tyrol was also organized: at a regional level only,
instead at the begin of November with a month of delay in December and not as usual
with the participation of champions from all over the world.. "Last year, during this
period, South Tyrol was declared a red zone and it was not possible to organize an
international meeting, but we managed to organize the event in mid-December for the
home athletes in order not to interrupt our streak.” Says Christian Mattivi, president of
the organizing committee since the first edition 24 years ago.
This year the meeting will take place on the weekend of the 13th and 14th November,
once again in Bolzano. The 25th edition is a jubilee and a sort of restart. It was not easy to
find a perfect date between the European Shortcourse Championship, that will take
place in Kazan in Russia from the 2nd to the 7th November and the International
Swimming League which will stop on 13th and 14th November in Eindhoven with the
play-off semifinals. Stefano Ballo with his Aqua Centurions team will also be involved in
the Netherlands. “For this reason the favourite of the Bolzano public, tenth over 200m
freestyle at the Tokyo games, obviously will not be able to go into the water at his
homemeeting and we are very sorry”, says Mattivi.
Neither this year the usual meeting with the stands packed and the boys cheering for the
poolside champions will be seen, but the OC wants to try to get back to a certain
normality. Mattivi: "We will not have an external audience in the stands, because the
capacity in Bolzano is limited and we calculate with about 350 participants when in the
golden days we had 800 competitors at the start. Obviously, entry is authorized only
with the Green Pass, and in the facility there will be the obligation to wear a mask. It will
all be a little different, but there will be top athletes from abroad. "
The big name in 2021 so far is certainly that of the Swiss Noè Ponti, surprise winner of
the bronze medal at the Tokyo Olympic Games over 100 butterfly in 50.74 behind
Caleeb Dressel (49.45) and Kristof Milak (49.68). Ponti earned the European junior
champion title in 2019 in Kazan over 50 butterfly and after a brief experience in North
Carolina in the United States in the summer he returned to train in Switzerland. His big
goal for next season is the long-course European Championship in August at the Foro
Italico in Rome.
In Bolzano Ponti will try to swim a new record in the 100 butterfly event. Mario
Todorovic's 50.80 fromm Croatia has stood since 2009 and is the longest-running record ever in Bolzano. Breaking the record would mean cashing in on 1000 euros. The total
prize money of the Bolzano meeting is almost 20,000 euros (exactly 19,880 euros). But
it will not be easy for Ponti as he will be challenged by Hungarian Maxim Lobanovszkij,
European silver over 50 freestyle in short course in Glasgow in 2019.
From Switzerland there will also be Alexandra Touretski, who competed in the 2016
Olympic Games in Rio. She is the daughter of legendary coach Gennadi Touretski, who
passed away in 2020 at the age of 71, and will be remembered as the one that coached
champions like Alexander Popov and Michael Klim, to name just two of the most
notorious.
The proven format of the event does not change. As always, the best three heats (the top
24 of each race) will be in the water in compact form. The key competitions will take
place on Saturday from 3 to 5 pm and Sunday from 1 to 3 pm. The concept of the most
important indoor swimming event in the Alps does not change either. As for many years,
Swimmeeting South Tyrol is also a Green Event, an event planned, organized and
implemented according to ecological criteria. The meeting will also be the first test of
the new season for all local and regional athletes.
Swimmeeting Bolzano › Team › news
The European Directive 2009/136/EC (E-Privacy) regulates the use of cookies, witch are used also on this site! By using our website or by clicking "OK" you agree. Further information
OK