The next stars for the Swimmeeting South Tyrol 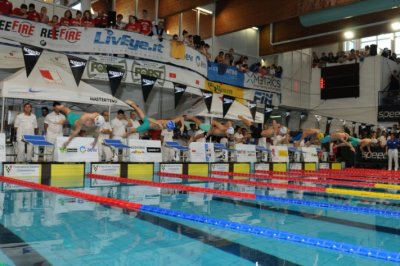 In just over a week, it's time again. On the weekend of the 5th and 6th November, the Swimmeeting South Tyrol will take place for the 20th time in in Bolzano. The starter field is getting more and more exclusive. After Olympian Anthony Ervin, World Champion David Verraszto, European Champions Marco Orsi from Italy and Andreas Vazaios from Greece as well as relay world record holder Madison Kennedy from the USA, even more big names will take their mark at the starting block.
"In the last few days we have managed to add some really interesting names", says Meetingchief Christian Mattivi. Since 1997, he and his team from SSV Bolzano have been bringing world class swimming to South Tyrol on the first weekend of November. "As in recent years, many strong Italians have confirmed their coming. Starting with Marco Orsi, audience favorite Fabio Scozzoli and the South Tyrolean home stars Laura Letrari and Lisa Fissneider now we also have Simone Sabbioni cominng". The strong backstroke swimmer took bronze over 100 m in London at the long course European Championship last May. He also holds the Italian record in 53.37. In London, Sabbioni has also gained silver with Italy's relay team after the two gold medals with taken with the "Azzurri" at the last short-course European Championship in December 2015 in Netanya, Israel. With Aglaia Pezzato another strong freestyler comes to Bolzano. The 22-year-old from Castelfranco Veneto has taken the last ticket in front of Letrari for the place in the Olympic relay and took the sixth place with the "Azzurre" in Rio. From Israel comes Yakov Yan Toumarkin, 24 years old, born in Russia, who has won five medals at European Championships in his career. Last achievment was the silver over 200 m backstroke at the European Championships in the 50 m pool in May in London. Also at the home EC in short course last year in Netanya he was twice second (200 m back and 100 m layers). Apart from Andreas Vazaios, there is another strong Greek at the Swimmeeting South Tyrol. Over 100 m dolphin Anna Ntountounaki swam into the 17th rank at the Olympic Games and just missed the semi-final.
Thursday, 20. October 2016