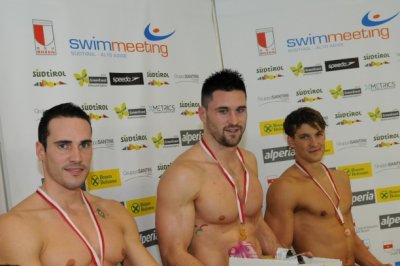 Even though Olympic Champion Anthony Ervin could not start over 100m freestyle due to a neck sore, the first day of the 20th Swimmeeting South Tyrol – swim sport greenevent in the alps - was a great success. The swimmers from Italy have won the duel against the rest of the world with 7 to 3 victories. Fabio Scozzoli was the only meeting record on the first day. The 28-year-old Italian won more than just the 50 m breaststroke in 26.60 seconds as his 12th victory in Bolzano, he also smashed the seven-yearold best performance of the Slovenian Emir Tahirovic by six hundredths of a second. On Saturday Marco Orsi managed to gain for himself two victories. The European champion won the 100m freestyle in 47.59 seconds. In 53.12 he was only just 8 hundredth of a second above the meeting record of the German Markus Deibler (53.04). Orsi was satisfied with his doing. "This reflects the work that I am doing during my training in" The highly anticipated duel with Olympian winner Ervin failed. "But the American will go the start on tomorrow sprint race. The freestyle sprint will be the highlight of the year ", says meeting head Christian Mattivi of the SSV BOZEN. The two South Tyrolean female stars were also able to cheer in the middle of the world class. There were the first home victories in Bozen since 2012. Lisa Fissneider won the 50m breaststroke at her season debut and was also satisfied with her time of 31.38 seconds. It was her overall third success in Bolzano after the victories over 100 m breast 2010 and 2011. Laura Letrari won even for the fifth time, on day one of the jubilee edition. She renounced the 100 m freestyle race, and remained over 100 m IM in 1.00.81 minutes as hoped under 61 seconds. A time that opens hopefull doors for the next qualifying race in Massarossa. Italian Champion Silvia Scalia stayed over 100 m backstroke in fast 58.29 seconds only nine hundredths over the meeting record swam by Kira Toussaint in the previous year. Piero Codia won the 50m butterfly in 23.41 seconds, and he also missed the event record of Steffen Deibler from the year 2014 (23.12) thinly as he did in the previous year. Madison Kennedy from the USA got the victory over 100 m freestyle. In very good 53,24 seconds, she won the duel with Italy's Olympic starter Aglaia Pezzato (53.75). Even over 100 m backstroke the victory went overseas. Jacob Pebley, an Olympic fifth over 200 meters, finished in 51.31 ahead of his countryman Matt Josa (52.6). Only in fourth place Simone Sabbioni in 53.27. Lucie Svecena (19 yo) granted a Czech victory over 50m butterfly in 26.97.
Friday, 28. October 2016