An Olympic Champion for the 20th edition: Anthony Ervin this years star at the South Tyrol swimming tournament on 5th and 6th November in Bolzano - duel with Marco Orsi 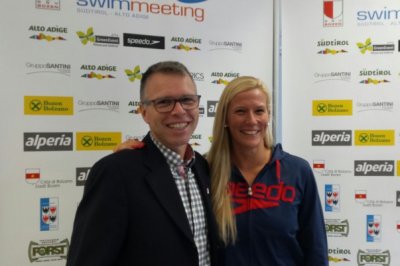 For the 20th edition of the Swimmeeting South Tyrol, the most important swimming event in Northern Italy an Olympic Champion comes to race. The 35-year-old Anthony Ervin, who won the gold medal in the Sprint over 50 m freestyle at the last games in Rio de Janeiro, comes to Bolzano on the first weekend in November. The meeting will take place this year on 5thand 6th November. Ervin is the oldest swimming Olympic Champion in time and has triumphed in Rio 16 years after his success in Sydney in 2000. But the US star will have a hard time in Bolzano. Italy's star Marco Orsi will also be on stage for the 50 and 100 meters.
For 19 years there has been the International Swimmeeting South Tyrol in Bolzano. The 2-day meeting in Bolzano has long made a name for itself internationally since. For many world class swimmers it is also the first stage of the new season, which has the first highlight of the post-Olympic season with the short course world championship in Windsor (Canada) from 6th to 10th December.
"Of course it ain’t easy to get stars to Bolzano a few months after the Olympics, but I think we have managed to make an attractive field once again. Of course, Anthony Ervin is the big star. At the age of 35, to gain Olympic gold is something as special as the history of this athlete, "says Meetingchief Christian Mattivi, who is especially looking forward to the duel Ervin VS Orsi.
Ervin has won his first Olympic gold at the 2000 Summer Games in Sydney over 50 free. In Sydney, he also won silver with the US freestyle relay. This was followed by the World Cup double over 50 and 100 m freestyle at the 2001 World Championship in Fukuoka in Japan. In 2003 Ervin ended his career at just 22 years, auctioned afterwards his Olympic gold medal at E-Bay to help the tsunami victims of 2004. At the age of 30, Ervin began to train seriously again. Fifth place at the 2012 London Olympics, two golds with the US team over 4 x 100 m freestyle and 4 x 100 m medley at the short track World Championship in Istanbul. At the Pan Pacific Championships in Gold Coast (Australia), Ervin conquered twice silver. Then the 12th of August 2016, the day when Ervin's life was fulfilled. 16 years after Sydney, he took his second Olympic gold over 50 m free and became the oldest Olympiac Champion in swimming history. Marco Orsi doesn’t really need a presentation in Italy. The 25-year-old from Budrio near Bologna has been one of the favorites in Bolzano for years. After a tough year 2016, in which a virus put him out of action, the powerguy wants to attack again. Five World Cup medals on long course, 20 at European Championships (18 of them on short course, the last three titles
were taken in Netanya, Israel last December), are Orsi’s collected International results. He currently holds four Italian records (50 and 100 m freestyle and 100 IM on the short course, 50 m free in long course).
But, as always, Bolzano hosts atlethes from different nations. For example, the Briton Jacob Pebley, fifth over 200 m back in 1.55.2 minutes at the London Olympics or David Verraszto. The Hungarian was last year's Kazan vice-world champion over 400 m IM on long course, and he is long-distance European champion in 2014 in Berlin and 2016 in London. Not enough, he is a three-time short-course European champion on his favourite 400 m IM. Butterfly specialist Marius Kusch from Germany was eighth, ninth and fourth at the last year short course Europeans. Laura Letrari and Lisa Fissneider are South Tyrol's aces
For Laura Letrari, South Tyrol's best swimmer at the moment, Swimmeeting South Tyrol has been a mandatory date for many years. The 27-year-old from Bressanone, who is training with Bolzano Nuoto and who is swimming for the Army team, missed the qualification for the Olympic Games in London. On the beloved short course, Letrari will try to qualify for the World Cup in Canada in December. She has the best chances over 100 m IM. In Bolzano she has already recorded four victories. Except the meeting in Bolzano, Letrari has only one other chance at the competition in Massarosa in mid-November to get the World Cup ticket. Lisa Fissneider South Tyrol's second professional swimmer will also get in the water in Bolzano.
For a year now the two-time junior world champion of 2011 has been training with the “Fiamme Gialle” another military sport group under the coaching of Christian Galenda in Rome. The 22-year-old has won the 100 m breast in Bolzano 2010 and 2011. Since last year Fissneider is been starting again for SSV Bozen.
Still „Green Event“ This year, the meeting follows the ambition to be carried out as a so-called "Green Event", in which various actions are made to be environmentally friendly.
The best three series in a block The tried and tested program has not changed. According to the slogan "Short, fast and explosive", the stars can be seen in a packed form on Saturday and Sunday: The three best series of every race (as usual, all styles over 50 and 100 m As well as the 100 m layers) will be presented to the spectators in Bolzano, separated from the rest of the program. On Saturday the stars can be admired between 4 and 6 pm, on Sunday between 1 and 3 pm. The swimmeeting again on livestreaming
After the successful premiere in 2012 the Swimmeeting South Tyrol will be seen this year for the fifth time live on the Internet. Swimming fans around the world can watch comfortably from their home or from wherever they want ALL the races on live stream. Connecting to on the organizer's homepage www.meetingbz.it or on www.liveye.it the final sessions of all races on Saturday can be seen at 16 o’clock until 18 o’clock and on Sunday between 13 and 15 o’clock. "A further attempt to let the world know our meeting," said Mattivi, but still nothing compared to the unique atmosphere around the pool.
Thursday, 13. October 2016