Two records each for Toussaint and VanderpoolWallace
Saturday, 07. November 2015

Just a few days and it's finally there 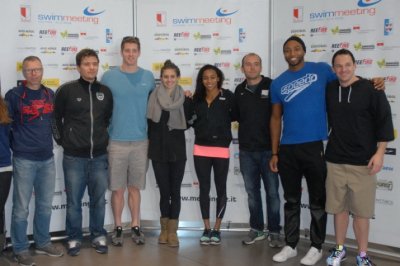 The coming weekend (7th and 8th November) the Swimmeeting South Tyrol is
held for the 19th time in Bolzano. This morning the latest news of the most important meeting in swim sport in the Alps have been presented. In his showdown, the organizer of the swim club SSV Bozen introduced Evelyn
Verrasztó. Today along with her, meeting chief Christian Mattivi also named the double Olympic champion Cullen Jones from the US and one of Italy's most successful swimmer Fabio Scozzoli as other big names. "Once again we managed to build up a meeting with a high level," said Mattivi satisfied.
Like the past editions, many top swimmers from the US are going to start in Bolzano. Today at the press
conference at the headquarters of the technical sponsor "Speedo" in Bolzano Cullen Jones, Katie Meili, Jimmy
Feigen and Arianna Vanderpool-Wallace from the Bahamas were there. All four came from the meeting in
Genoa last weekend. Cullen Jones is a known name in Bolzano. The 31-year-old is a specialist over 50 and 100m freestyle and has won two Olympic gold medals with the US-Team in his career: Beijing 2008 with the 4 x 100 m freestyle relay and four years later in London with the medley relay. Three years ago in London Jones was also Olympic silver medallist in the freestyle sprint (on this distance, he also holds the US record in 21.40) and gained Olympic silver with the US quartet over 4 x 100 m freestyle. With the freestyle relay Jones also won two World Championship gold, in 2007 Melbourne and 2009 in Rome. In addition to Jones the female sprinter Madison Kennedy will be at the start in Bolzano too. In 2012 She won the 50 and 100m freestyle races at the Swimmeeting. The last-minute coup is called Evelyn Verrasztó. "The Hungarian wanted to start this weekend in Moscow, but thanks to the mediation of Laura Letrari she will be seen in Bolzano," said Mattivi pleased. Verrasztó took part at three Olympic Games (2004, 2008, 2012) and won in her successful career no less than 17 medals at European Championships. Six in the long course (1/3/2) and eleven (3/5/3) in the 25-meter pool. Verrasztos favourite races are the 200m IM and the 200m freestyle. In Bolzano she will attack the meeting record over 100m IM set by Natalie Coughlin. Along with her comes the husband Gabor Balog, EC-third over 200m backstroke last year in Berlin.
For many years now Fabio Scozzoli has been one of the audience favourites at the meeting. Only in 2013 he was missed because of his serious knee injury. The 27-year-old breaststroke specialist was World champion and eighttime European champion, he holds all Italian records over 50 and 100m breaststroke and celebrated already nine victories in Bolzano. If he succeeds in winning the "Double", he could catch up with eleven victories to Natalie Coughlin, who in Bolzano lies third in the all-time winner list. The list is lead by the German world-class swimmers Thomas Rupprath (18 wins between 2001 and 2008) and Janine Pietsch (16 wins between 2000 and 2006). "But it won’t be easy for Fabio this year " Mattivi is convinced. Together with Scozzoli the habitué Federico Bocchia comes to Bolzano too. He won with the Italian relay 4 x 50 m
freestyle at the last three European Short Course Championship a complete set of medals. National Teammate Marco Belotti has taken silver with the “Azzurri” at the Short Course World Championship in Doha eleven months ago. His first bis success goes back to the Short Course European Championship in Rijeka in 2008, where the Italians mastered the 4 x 50 m medley relay.
In addition to last minute commitments, the Bolzano meeting again hosts numerous other top swimmers from Italy. The team is led by star Marco Orsi, Erika Ferraioli, Silvia Di Pietro and Elena Di Liddo, all of them already
successful in Bolzano. Like none other than Laura Letrari from Bressanone. Four wins, this is the gold medalbalance of the 26-year-old in Bolzano, in the pool where she trains almost daily. Unfortunately in this year's edition Lisa Fissneider the other high level local heroine, will not be at the start, since the 21-year-old has been training in the US since mid-October. For most of the top swimmers in Bolzano, South Tyrol Swimmeeting is an important moment to test their shape in sight to the Short Course Swimming Championship in Israel in four weeks. "It's all done for a two-day spectacle swimming," said Mattivi. "We hope that we can please the audience and see a few more records".
The swimmeeting again on livestreaming
After the successful premiere in 2012 the Swimmeeting South Tyrol will be seen this year for the fourth time live on the Internet. Swimming fans around the world can watch comfortably from their home or from wherever they want the races on live stream. Connecting to on the organizer's homepage www.meetingbz.it the final sessions of all races on Saturday can be seen at 17:30 o’clock until 19:30 o’clock and on Sunday between 14.30 and 16 o’clock. "A further attempt to let the world know our meeting," said Mattivi.
Monday, 26. October 2015

The Swimmeeting South Tyrol is at the door
Monday, 26. October 2015

Wildeboer, Vanderpool-Wallace and Laxton at start at the Swimmeeting South Tyrol in three weeks
Tuesday, 13. October 2015

Swimmeeting South Tyrol on 7th and 8th November in Bolzano

World-class Swimming in Bolzano for the 19th time
Swimmeeting Bolzano › Team › news
The European Directive 2009/136/EC (E-Privacy) regulates the use of cookies, witch are used also on this site! By using our website or by clicking "OK" you agree. Further information
OK