Two records each for Toussaint and VanderpoolWallace
Saturday, 07. November 2015 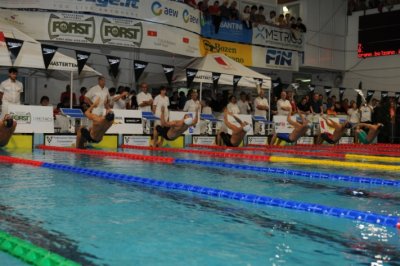 For the 19th time Bolzano welcomes the world swimming class at the Swimmeeting South Tyrol. And the Stars shined bright on the first day with outstanding performances by the Italian crowd favorite Marco Orsi and the USAmerican Katie Meili each with two victories each. Orsi at his first start on day 1 in Bolzano literally smashed its own meeting record over 100m freestyle from the previous year (47.22). In 46.98 seconds he remained the first Italian to swim under 47 seconds this season. At the end of the day Orsi showed also a splendid race over 100 IM. He stop the clock in very good 53.11 seconds. Although slightly over the meeting record of Markus Deibler (53.04) from the previous year, he definetely decided the duel with Fabio Scozzoli (second in 54.32) for himself. "I'm very satisfied. These are two good times. The pool here in Bolzano is very fast, "said Orsi rejoiced. Scozzoli won the 50m breaststroke in 26.99 seconds and could celebrate his tenth overall victory in Bolzano. But let’s begin from the start. The first event record was set up by the Bahamian Arianna Vanderpool-Wallace. Over 100m freestyle the Olympic finalist of London scratched a record from the year 2009, where the rubbersuits ruled the swimming world. In 52.69 seconds she was 0.12 seconds faster than Ranomi Kromowidjojo six years ago. Expected by experts, however, was a new meeting record over 50m breaststroke women. Katie Meili is in shape and she demonstrated it by turning in 29.86 seconds. She was clearly faster than the last year in Bolzano (30.44). Three years ago Kira Toussaint from the Netherlands set a meeting record over 100m backstroke swimming. Today she was five hundredths faster than 2012 and finished in 58.20 seconds setting so that the fourth and last meeting record of the first day. A Brazilian victory could be seen over 100 m backstroke men. The Brazilian Guilherme Guido, double world champion with the Brazilian Team at the Short Course World Championships 2014 in Doha, won in 51.64 seconds. Italian victories over 50 m dolphin. Silvia Di Pietro could not be beaten in 26.08 seconds. She referred the German Alexandra Wenk (26.68) in second place. The men’s race was dominated by Piero Codia showing a big race. In 23.39 he approached dangerously to the meeting record of Steffen Deibler (23.12), and remained only 18 hundredths over the the short course Italian Record of Marco Bellotti. Over 100m IM Katie Meili then celebrated her second victory. In splendidly 58,93 seconds she was very close and bearly missed to take the meeting record from none other than Natalie Coughlin (58.72). Second place went to local swimming star Laura Letrari. Although weakened by food poisoning during training camp 4 days before, she missed in 1.01,01 minutes, the limit for the Short Course Swimming Championships only by seven tenths of a second
Wednesday, 04. November 2015

The Swimmeeting South Tyrol is at the door
Monday, 26. October 2015

Wildeboer, Vanderpool-Wallace and Laxton at start at the Swimmeeting South Tyrol in three weeks
Tuesday, 13. October 2015

Swimmeeting South Tyrol on 7th and 8th November in Bolzano

World-class Swimming in Bolzano for the 19th time
Swimmeeting Bolzano › Team › news
The European Directive 2009/136/EC (E-Privacy) regulates the use of cookies, witch are used also on this site! By using our website or by clicking "OK" you agree. Further information
OK