Cielo and Scozzoli not the only ones: Guido, Orsi and Codia will come to Bolzano on November 2nd and 3rd for the Swimmeeting South Tyrol 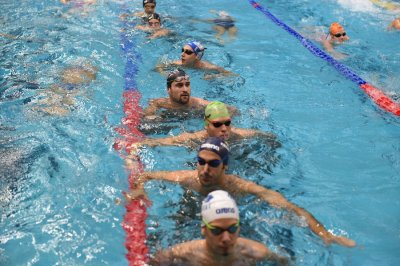 Three weeks before the 23rd edition of the Swimmeeting South Tyrol, which opens the short-course season in Italy on November the 2nd and 3rd, with a two-day world-class event, the organizers of the SSV Bozen can now announce further big names that are going to swim for victories in South Tyrol in 20 days. At the press conference last week, the organizers had already announced Cesar Cielo, Fabio Scozzoli, Martina Carraro and Laura Letrari as these years’ stars. "In addition to Cesar Cielo we will see another top Brazilian in Bolzano, the world record holder of the 50 and 100 m freestyle on the long-distance course, Guilherme Guido" says OC boss Christian Mattivi. Guido took 7th place at the World Championships in Gwangju in South Korea in July. He won two gold medals with Brazil in the relay at the 2014 Short Track World Championship in Doha, and he has been to Bolzano before. Four years ago, he won the 50 and 100 m backstroke races. Like Fabio Scozzoli (17 wins so far), Marco Orsi is a regular in Bolzano. The spectators’ darling has won twelve times in his career in Bolzano. He is fourth in the all-time ranking. The "bomber" from Budrio comes as reigning short course vice world champion to Bolzano. Last year he won silver over 100 m IM at the World Cup in Hangzhou - China. The two-time European short-course champion (2015 in Netanya over 100 m freestyle, 2017 in Copenhagen over 100 m IM) holds three records in the Italian 25-meter pool: 50
and 100 m freestyle (20.69 and 46.06 seconds respectively) and 100 m IM in 51.03 seconds.
Piero Codia too likes the South Tyrolean capital. The European champion from 2018 in Glasgow over 100 m butterfly can currently count three Italian records for himself. He is
the fastest Italian in the 50m pool over 50 and 100m butterfly (respectively 23.31 and 50.64 seconds) and also holds the short-track Italian record over 50m butterfly (22.76). The Israeli Zohar Shikler was already at the start (50 and 100 m freestyle) at the Olympics in Rio. She is coming to Bolzano for the first time, like the Swiss Svenja Stoffel, who also
dreams of participating in the Olympic Games in Tokyo.
Super-Jackpot in 11 races of 1000 Euro each
In eleven of the 18 individual races, the winners will be able to win a prize money of € 1,000 which is the super jackpot when a meeting record on a raceis at least 3 years old.
Three event records in Bolzano are still from the year 2009, when it was allowed to swim for the last time with the high-tech suits. Curiously, they are all three men's races. The 100
butterfly (Mario Todorovic 50.80) as well as the 50 and 100 backstroke (Nick Thoman in 23.69 e 50.32).
Winning formula unchanged: "Super series" on Saturday from 4.40 pm and on Sunday from 1.50 pm
There are no changes in the proven program flow of the last years. As always, the numerous audience will see the stars in action on Saturday at 4.40pm and on Sunday from
1.50pm onwards. The three best series of each competition (all styles over 50 e 100 meters and the 100 m positions are completed within 90 minutes.) Mattivi stands for the
format: "Why should we change something that works great? The spectators like it because they see the most important races in no time and the athletes have nothing to
complain about, as they do not have to be in the pool building from morning to night, and many of them come to us because of the special and unique atmosphere that reigns during
the Meeting".
All races live on streaming
Since 2012 the entire meeting is also shown live on web-streaming. Swimming fans around the world can follow all the competitions (including Super Series) on
www.meetingbz.it or www.liveye.it in real time. Altogether, another reason the Swimmeeting South Tyrol is known around the world and has a good reputation.
Wednesday, 02. October 2019