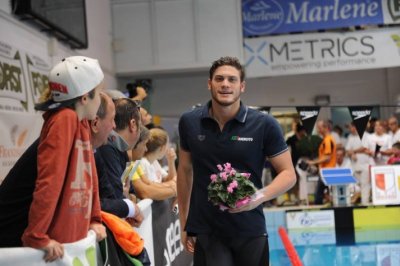 After Fabio Scozzoli, Nicolò Martinenghi and Marco Orsi, after Erika Frraioli and Aglaia Pezzato and the local stars Laura Letrari and Lisa Fissneider the 21st edition of the Swimmeeting Alto Adige programmed in Bolzano on the next weekend (4th and 5th November) turns more and more into an Italian tournament. Matteo Rivolta, Matteo Milli, Simone Sabbioni, Elena Di Liddo, Alice Mizzau and Margherita Panziera – even for them the event held in Alto Adige will be an important testing ground at the beginning of the season and four weeks ahead of the Open Italian championships programmed on the first two days of December in Riccione, two weeks before the European Short Course Championships in Denmark (from 13th to 17th December).
Obviously not only so much Italy at the meeting of Bolzano. After the Dutch Kira Toussaint, the American Madison Kennedy, almost the complete Austrian National Team, which will arrive to the chief town of Alto Adige directly after an altitude training period in Val Senales, the Russians Evgeny Lagunov and Oleg Tikhobaev, the Brazilians Felipe Lima and Matheus de Santana, Bolzano will have Evelyn Verraszto in the pool, the great Hungarian swimmer that took part at four Olympic Games and, during her career, won 19 medals at various European Championships from 2009 to 2016. Present as well the Germans Marius Kusch and Andreas Wiesner, two promising swimmers in Germany with the goal to participate at the Olympic Games in Tokio in 2020. Kendyl Stewart, vice World Champion in the 4x100 medley at the World Championships in 2015 and American like Kennedy, will participate too. “We put the best of the best of Italy in the short course in the men's camp, regarding the short distances. Orsi holds the national records in the 50 and 100 freestyle and in the 100 medley, Simone Sabbioni in all of the three backstroke races (50, 100 and 200), Fabio Scozzoli in the 50 and 100 breaststroke, Matteo Rivolta in the 50 and 100 butterfly, in total 10 Italian record holders in the short course in 18 individual races”, says Christian Mattivi of the SSV Bozen society, organizing the event at the Maso della Pieve since 1997. “During the previous days we managed to bring Matteo Rivolta, Matteo Milli and Simone Sabbioni, as well as Alice Mizzau and Elena Di Liddo to Bolzano. For two days Bolzano will look like a small Italian Championship at the beginning of the season.”
The program does not change. All the stars will jump into the water in the three best series on saturday from
3:30pm to 5:30pm and on sunday from 1pm to 3pm. The show at the Maso della Pieve is guaranteed as always.
We remind that in four races there is the chance to win a super-jackpot of 1000 euro for the athletes that manage to best one of the event's records that held out since 2014. All the races can be seen live on the internet on the event's website (www.meetingbz.it) or on www.liveye.it.
Sunday, 22. October 2017