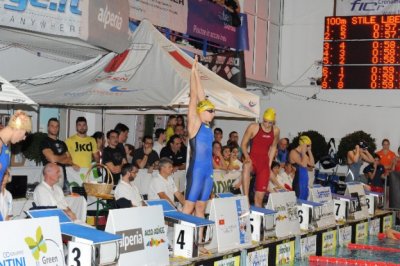 The Azzurri Elite did not disappoint on the first day of Swimmeeting South Tyrol in Bolzano. Ten races, seven wins for Italian swimmers and the highlight was evidently performed by Fabio Scozzoli with the double success over 50 breaststroke and 100 IM, a race where Marco Orsi retired at the last moment. Scozzoli has established the first of the two event records of the day, winning 26.21 in front of the Brazilian Felipe Lima (26.83) and landsman Nicolò Martinenghi (26.90). Scozzoli has lowered his last year record in Bolzano by 39 cents. In the closing of the day he won the duel over the 100 IM with Simone Sabbioni, reaching 54.61 against the 54.81 of the rival. Scozzoli has collected 14 wins in total and is the third at the Bolzano meeting in this ranking (Thomas Rupprath 18 wins and Janine Pietsch 16). The second record of the day was set by the Dutch Kira Toussaint who won the 100 backstroke improving her record from the 2015 event by four cents touching in 58.16 in front of Margherita Panziera (58.48). Toussaint also doubled her success winning the 100th freestyle race in 54.10, leaving Aglaia Pezzato (54.59) and the American Madison Kennedy (54.76) behind. Marco Orsi, who once again is the audience favourite in a crowded facility, won the 100 free style in 48.49, his eleventh overall victory in the South Tyrolean capital. Orsi left the German Marius Kusch (48.85) and the Russian Evgeni Lagunov (49.30) in the lower medal ranks. In the 50 female breaststroke without Lisa Fissneider (knee problems since August) left Martina Carraro win in 31.02 in front of Ilaria Scarcella (31.51) and Lisa Angiolini (32.10). Sixth career win at the home meeting for Lara Letrari. The 28-year-old from Bressanone returned from a training camp on Friday and won first place in 1.00.78 even after a slippery first turn at 25 meters beating Israeli Amit Ivri (1.01.18). Italian wins in the 100 men's backstroke for Matteo Milli, who in 52.37 had the best over Simone Sabbioni, the Italian short-course recordholder, second in 52.48. The 50 butterfly win goes to Matteo Rivolta in 23.69 in a photo finish in front of Kusch (23.71). On Sunday Rivolta aims to take the event record on the 100 butterfly race, which goes back to 2009 signed by the Croatian Todorovic (50.80). US victory finally over the 50 female butterfly. In 26.24 Kendyl Lee Stewart is the fastest in front of Elena Di Liddo (26.52).
Thursday, 26. October 2017