Other stars still swimming in Bolzano on 4th and 5th November 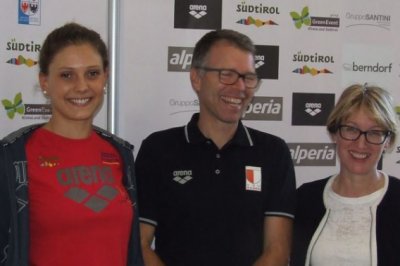 The 21st edition of the Swimmeeting, since 20 years the highlight event in Alto Adige, was presented this morning at a press conference at the Maso della Pieve. Lisa Fissneider, twice junior world champion of 2011 in Lima, Peru, back to training in Bolzano since the beginning of this season under the guidance of Volker Müller, was present as well.
More than twenty Olympic, World or European champions climbed into the swimming pool in Bolzano during the
last twenty years. Everything started in 1997. Twenty years ago the event's star was Manuela Della Valle, then
Italian champion and, on the national level, an all-time shining star. Twenty years later the meeting of Bolzano is,
as usual, the first important test of the new season on the short distance in Italy, just one month ahead of the
programmed open Italian championship in Riccione (1st and 2nd December), last useful meeting to conquer a place for the European championships on the short distance in Copenhagen, Denmark (13th-17th December).
“We have seen plenty of champions in Bolzano”, says Christian Mattivi, from 1997 president of the organizational committee of the sports club (SSV Bozen), who invited stars form all over the World to Bolzano. From Ryan Lochte to Aaron Peirsol, from Therese Alshammer to Natalie Coughlin, not forgetting all the stars of the Italian swim-sport and Thomas Rupprath, with 18 victories the recordman in Bolzano.
“Again, in this edition the Swimmeeting Alto Adige will witness many champions at the start. Especially the two
races on the 50 and 100 breaststroke will be very interesting”, Mattivi promises. Fabio Scozzoli, the great Italian in breaststroke since over a decade, already won twelve races in Bolzano. Last year he was the only one who
managed to best one of the event's records (50 breaststroke with 26,50) and, with his 29 years age, he is as fast
as never before. The sixth place at the World Championships in Budapest won at the end of July on the 50
breaststroke, which represents a new Italian record on the long course (26,91), testifies this.
During his career Scozzoli won 22 medals between World and European championships, established thirteen Italian records, among them one European, boasts sixteen Italian titles and still wants to impress. In a fascinating generational duel Scozzoli will have to deal with Nicolò Martinenghi, incumbent junior world champion on the 50 and 100 breaststroke, and with Felipe Lima, the Brazilian who finished fourth at the World Championships on the 50 breaststroke, in Bolzano. “I think there won't be a lack of stimulus”, says Mattivi, who also managed to bring the Mexican Miguel de Lara Ojeda, specialist of the 200 breaststroke, to Alto Adige.
Martinenghi, eleven years younger than Scozzoli, represents the new generation of Italian swimming. At the youth and college level he rules in Europe (seven gold and two silver medals at the European juniors in 2016 and in 2017) and in the world (two gold medals in Indianapolis at the Youth World Championships) since two years. At the Indianapolis's semifinal Martinenghi moved the Italian record in the 100 breaststroke on long course to 59,01.
Fissneider and Letrari can't be missing
The meeting of Bolzano is important for the local stars Lisa Fissneider and Laura Letrari too. Fissneider will
participate at the home meeting, but not at the Italian short course championships in Riccione. “After the surgery
at the knee some weeks ago I don't put too much pressure on myself, hope to get back to the top in Italy without
rushing”, says Fissneider, who will face Martina Carraro as well, Italian record holder on the long course in the 100 breaststroke (1.06,41), in her races (50 and 100 breaststroke). “It won't be easy to be in great shape, but
swimming in Bolzano is always a pleasure and a stimulus, because many friends and my family too will be at the
poolside”, says the 23-years-old from Caldaro who competes for the SSV Bozen.
The meeting of Bolzano is crucial for Laura Letrari as well. The Bolzano Nuoto athlete from Bressanone is training in Linz, Austria, since September 20, and will arrive to Bolzano after an altitude training period in Val Senales. “The qualification times for the European championships on the short course are difficult, almost impossible, but I will try, especially regarding the 100 and 200 medley”, says Letrari.
Two old meeting's acquaintances present in 2017 again: The American sprinter Madison Kennedy and the Dutch Kira Toussaint, who holds the event's records in Bolzano on the 50 and 100 backstroke (27,15 and 58,20).
Super-Jackpot of 1000 euros in six races
The total prize money of the meeting of Bolzano 2017 is 15.630 euro. In six races there is a super-jackpot of 1000 euro that goes to the athletes who can best a record of the meeting that held out at least since 2014. Four event's records are in force since 2009, the last year of the high-tech swimsuits. Namely the ladies' 50 butterfly (Inge Dekker with 25,70) and three in the men's camp: 100 butterfly (Mario Todorovic with 50,80), 50 and 100
backstroke (Nick Thoman with 23,69 and 50,32 respectively).
Unchanged program: “The best of” saturday from 4 p.m. and sunday from 1 p.m.
The previous years' compact and successful program will stay unchanged. As always the audience can see the
stars in action on saturday during the late afternoon and on sunday at lunchtime. The three best series of every
race (50 and 100 in all swimming styles and the 100 medley) will be presented in one session, which will take
approximately 90 minutes on saturday from 4 p.m. and on sunday from 1 p.m.
Races live on the internet too
As ever since 2012 it will be possible to see the races in Bolzano in live streaming on the internet. Fans all the over the world can assist to the races in Bolzano live clicking on the website www.meetingbz.it or www.liveye.it. This way everybody can enjoy the show comfortably at home or wherever he or she wants. A further organizational effort to increase the quality of the meeting of Alto Adige known all over the world.
Swimmeeting Bolzano › Team › news
The European Directive 2009/136/EC (E-Privacy) regulates the use of cookies, witch are used also on this site! By using our website or by clicking "OK" you agree. Further information
OK