Triplet for the Azzurro and the Dutch in Bolzano 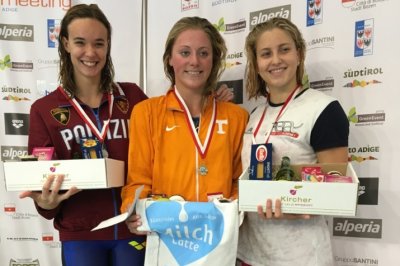 Fabio Scozzoli and Kira Toussaint are the two protagonists of the 21st edition of the Swimmeeting South Tyrol - Greenevent. Three wins and two records each at this swimming weekend in Bolzano. Today Scozzoli, after the wins over the 50 breaststroke and the 100 IM on Saturday, won the 100 breaststroke, improving the record of the meeting bringing it down to 58.65 (the previous one was from 2014 - 58.73). "I'm very happy to swim in Bolzano, it’s always beautiful," said the 29yo after his 15th career win in Bolzano. Scozzoli had the best for a tenth in front of Nicolò Martinenghi (58.75) and Brazilian Felipe Lima (59.20), the World Cup third in 2016. Satisfied and convincing also Kira Toussaint. Saturday the 23 yo prevailed over 100 backstroke and 100 freestyle, today she also won the 50 backstroke, lowering the meeting record she already held (27.15 by 2015) of three hundreths. Toussaint triumphed in 27.12 in front of Margherita Panziera (28.08) and Beatrice Siboni (28.10). The 50 free style event was won by Madison Kennedy. The US had no rivals. 23.93 was her time for her fifth win in Bolzano leaving second Erica Ferraioli (25.03) and third Toussaint (25.31) Disappointed Matteo Rivolta, who competed in Bolzano for the first time. The Italian record holder arrived in South Tyrol to beat the record of the 100 butterfly but in 52.07 he had to settle for the second place behind German Marius Kusch, who won in 50.95 getting very close to the 2009 record (50.80) by only 15 cents. The female 100 butterfly gold went to the American Kendyl Lee Stewart in 57.99 in front of Elena Di Liddo (58.40) and the Israeli Amit Ivri (59.04). Saturday Stewart had also won the 50 butterfly. Over the 50m male backstroke Simone Sabbioni got his revenge. He also got his victory debut and won in a promising 24.04 in front of Matteo Milli in 24.53 (100m gold on Saturday). Finally, doublette at the debut in Bolzano for Martina Carraro, who after the 50 breaststroke win got also gold over the double distance in 1.06,85, ahead of Ilaria Scarcella (1.07.70) and Lisa Angiolini (1.09.02). Absent for knee problems unfortunately the local star Lisa Fissneider due to knee injury. Last but not least a great race by Marco Orsi. The Italian “bomber” returned from a training period in Turkey and won the 50 freestyle in 21,90 collecting the 12th victory in Bolzano, he put strongly himself in front of Eygeni Lagunov (22,35) and the two third places Matheus Santana from Brasil and Marius Kusch from Germany, who shared place and time (22,45).
Saturday, 04. November 2017